PHOTO ID REQUIRED FOR ALL INSPECTIONS

As the series winds up after 37 historic years, this is a chance to claim a piece of television history in this world famous cul de sac which viewers in 60 countries will recognise as the place where “good neighbours become good friends”.

Number 3 rounds out the bowl of the court with an inviting split level floor plan, zoning its 4 bedrooms privately along the front wing, and offering 2 light-filled living areas and a grand elevated pergola overlooking Billabong Park.

The vintage bathrooms are ready for remodelling, like putting in a new look TV set, with a big bright kitchen equipped with a gas top upright cooker and dishwasher – perfectly neat and functional but also open to creative vision from aspiring decorators.

Infused with gorgeous natural light from its east facing kitchen and family room, and beautiful afternoon sun into the west facing lounge, this is a home that presents studio lighting and garden views from almost every frame.

Lovely front and rear gardens bring great suburban lifestyle to the property which offers an in-ground pool, plenty of paved outdoor entertaining space, enough lawn for a dog, and direct gate access to Billabong Park, the baseball club and swathes of lush grass where children can run free and play sport.

Tradies and tinkerers like poster girl mechanic Charlene will appreciate a large semi-enclosed double carport with roller door, workshop and a versatile laundry/office.

This is a rare opportunity to stake your claim in that television history, preserving a part of Ramsay Street for yourself – where you can live out the show’s premise of a tightknit neighbourhood in the leafy eastern suburbs of Melbourne.

Ironically, there’s no drama here, just absolute relaxation for the family close to schools, shops, parks and transport connections including Birralee Pre-School, Holy Saviour Catholic Primary, Weeden Heights Primary, Highvale Secondary, Emmaus College, spoilt for shopping choice at Vermont South Shopping Centre, The Glen and Forest Hill Chase, with bus and tram routes to Deakin and Monash Universities on your doorstep, and gateway connections to the city and the coast via the Eastern Fwy, Eastlink and the M1.

1985 is the year it all began for Neighbours. 2022 is the year you become a part of the story – as the writer, director and lead star of your own fairytale. 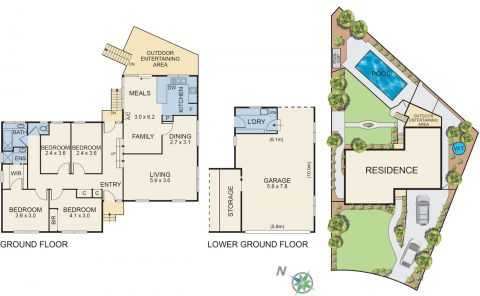